As many languages you know, as many times you are a human being

What’s the porpose of the project?

The project Language Identity aims to help gain a better understanding of ourselves and our emotions through the languages we speak. Research finds that those who are able to speak multiple languages, claim to experience a change in personalities when changing between them. Particularly bilinguals feel different levels of emotions when they speak their first language as compared to their secondary languages, lending greater importance to self-identifying ourselves by language as it affects the way we feel, think and behave.

Customised data visualization of languages in form of accessory

Language Identity collects the data of spoken language of bilinguals and analyses levels of their emotional reactions to different emotional phrases. The product is used in an isolated booth, measuring the user’s levels of emotions through E4 wristband technology. The collected data is visualised at the end of the user experience in the form of a pendant. This lasting memory can be shared on social media with friends.

Sketches of a draft site map and early mockups

Why the problem is important?

Language Identity gives an opportunity to understand how languages effect on our way of looking at things. Every language makes people think in unique way. Bilingual people experience different levels of reactions when they hear or speak some emotional phrases.

“Language identity” aims to create a more accurate and experiential knowledge about self-identity in different languages. Language is an integral part of life, that forms self-identity of individuals.

The user flow of the project is linear

The first screen shows a logo of “Language identity”. It follows with a short explanation of what users can expect from the following experience, that gives them better idea of the project and makes them more excited and ready for the test.

The user needs to choose their spoken languages for further experiment. There are two options for choosing a language.

After choosing a language the user has to answer simple questions in the chosen language, which tests the user’s ability to understand that language and immerses the user with interaction. It’s important to “break the ice” and let the user get used to answering the questions by voice for further questions. In order to make the experience more engaging, questions and challenges are different in each language.

Picking the year by scrolling

The next step involves choosing the year the user started speaking the language by scrolling. After the user picks the year the timeline is transforming into a circle. The interaction leads to the creation of circles that represent how long the user speaks a language and are used for the resulting visualization.

The following questions figure out who the user speaks different languages with (i.e., parents, romantic partner, friends, colleagues). The colour of the background changes depending on the chosen answer. The colour combination is used in the final visualization.

The test continues with emotional phrases that are presented audio-visually to get emotional feedback of the user that is collected by the E4 wristband. Because of the previously analysed research some emotional phrases like “I love you”, “Aren’t you ashamed”, “Go to your room”, also swear words and lie trigger emotional reaction of people and depend on languages a speaker use. Together with audio that triggers user’s emotions background colours and location of the text effects on the perception of the information of bilinguals.

Visualisation of respose to emotional phrases

After each phrase, the user has to draw a line that changes to a wave that represents different levels of emotions the user experiences by completing the task. Emotional levels are collected by the E4 wristband and influences the form of waves.

The recorded lines are combined to a visual representation of an individual emotional spectrum that is related to the chosen language. The user can see the final visuals that are based on data collection during the experiment.

Visualisation of the data collected during the experiment

The collected data combines and creates a pendant.

What if we knew when we are going to die?

What’s the porpose of the project?

Wrist in Peace is a smart app that can predict the date of natural death of a person. A wrist band measures physical parameters of a body and shows a probability of death by performing X activity in a certain day.
According to made research some phycologists say that knowing of a date of death may increase the perception of life’s value, motivate people to do more for themselves and their families, communities. Wrist in Peace was designed to help people stop wasting time and do important things in their lives. The app would work as a reflection exercise "what would you do if you knew you'd die this year" and help them have style of thinking "death reflection".

How the data collection works?

The technology requires an array of "Fixed Data" and "Variable Data" in order to work. The fixed data can be summarized by a specific type of blood test, gender, height, ethnicity, and history of family illnesses. The variable data are subject to change with the wrist band monitoring the user. Some of the variables would be activity, sleep cycle, location in the world, stress and data like smoking, alcohol and drug consumption, weight, type of meals and sexual activity (requires the input of the user).

The user flow of the Wrist in Peace project 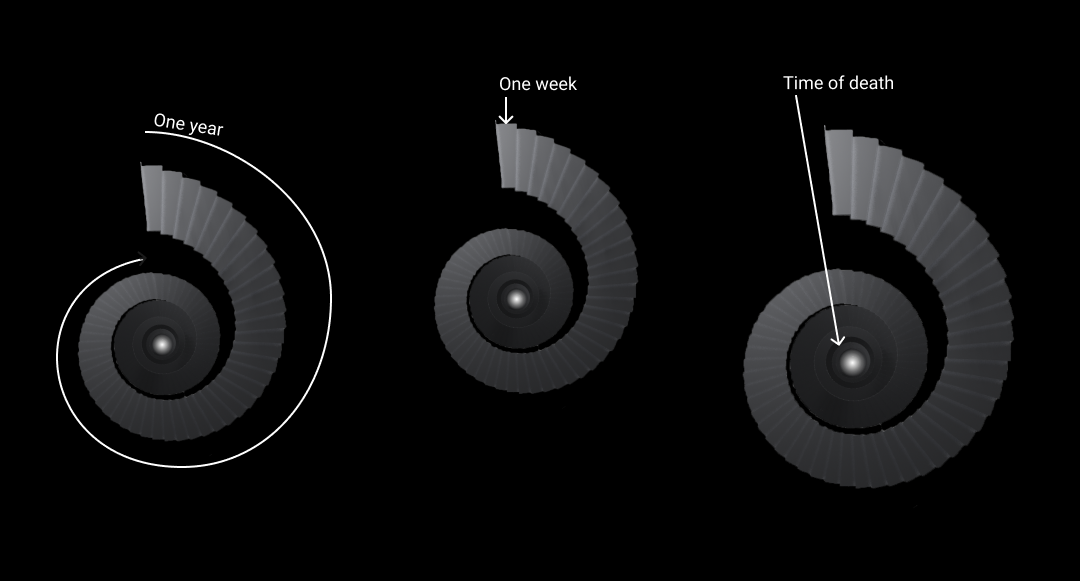 Life of a user is represented by spiral stairs and the light in the end of the tunnel which represents death. Each stair is one week.

A user can see and compare statistics of all activities per day, week and year. The golden line of activities shows what a user has to achieve, for example, how many steps, how many hours of sleep, what rate of stress. A user loses a week if they have bad habits or doesn't achieve goals during a week. If a user does more activities than planned, then a week adds to their lifetime. 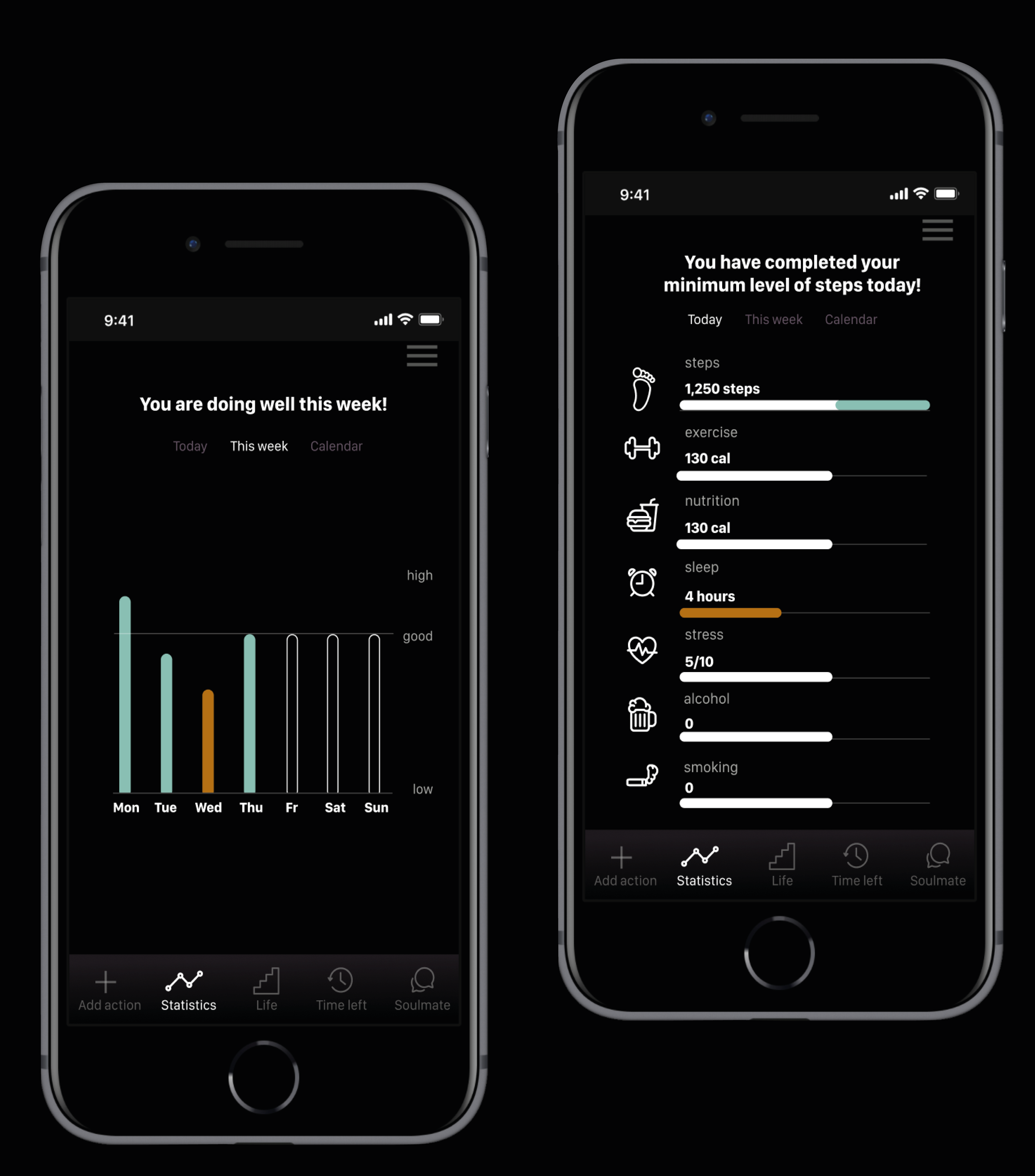 A user needs to take a blood test and fill a survey to learn the day of death. Then a wrist band will measure physical parameters throughout a day and show probability of death.

A user can add new actions by adding them manually or taking a picture, for example of food or a cigarette. The technology analyses type of a product and quantity. For adding actions manually there are categories, that help a user to find the right action fast.

People don’t talk about death and live like they are immortal. With Wrist in Peace they will see how bad habbits directly effect on their life and stay motivated to improve their activities.

I’m Anastasia Yezhyzhanska, an Interaction Designer. I am passionate about creating user-centered design and solving challenging problems. The ability to change people’s lives for the better through design inspires and motivates me to constantly learn more.

I am open to new ideas and people and I'm currently looking for work experience in Berlin with a working culture that values enthusiasm and thoughtfulness. I recently finished my studies in the Visual & Experience Design MA program at UE Berlin. Before I studied marketing, brand management and worked in the advertising field. These experiences enriched me as a designer. 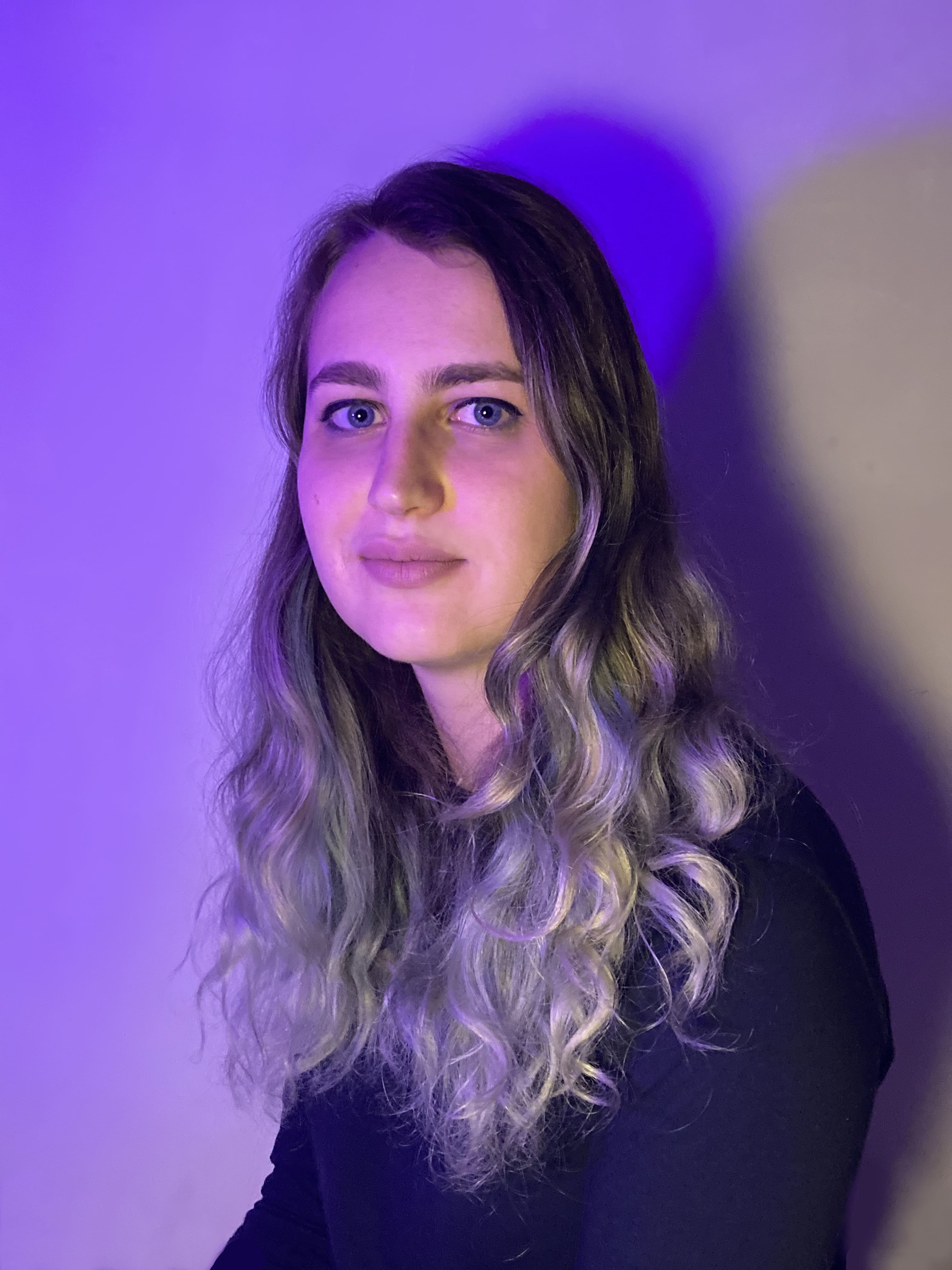 For any proposal of collaboration,
feel free to contact me